"If I vote no, in front of my leadership, in front of the Speaker of the House, there's a big chance, I can guarantee you, it's almost 100%, Ewa Beach will be toast."

At a community meeting several minutes of video were captured of Matt LoPresti confronting Rep. Rida Cabanilla on her absence during the final House vote on SB1 HD1, the recently passed "same-sex marriage" legalization bill.

Though many of LoPresti's comments and commentators on the subsequent facebook post of the video lambasted the Rep. for opining that her vote yes or no "really doesn't matter", this matter runs much deeper than its surface.

She cited certain loss of money for James Campbell High School, Ewa-Makai Middle School, the "new High School in Ewa Beach", the widening of Ft. Weaver Rd., and others.

"Is it worth it for me to vote yes, or no, on that instance?  When the appropriation of the whole district is riding on it?"

The real tragedy is that any measure, any measure, incapable of passing on its own merits would be rammed through by our elected officials.  And worse, that this would be accomplished by holding money for schools and traffic mitigation as hostages.  This does not excuse the Representative from Ewa Beach from her failure to do her duty.  But rather her failure is symptomatic of the browbeating engaged in by the establishment of our State government.

Is it any great wonder, with this backroom hammer swinging, that the Educational, Social, and Business edifices of our State are crumbling?

Perhaps, with this kind of rippling that rolls out in the aftermath of Hurricane Abercrombie, we will remember what has been done, not done, and ultimately what has been undone by our Legislature and Governor.  And perhaps we the people of Hawaii will do something, come 2014, in return.

The entire video clip can be found here.

Posted by If Hawaii News at 4:10 PM No comments:

Today the Honolulu City Council voted unanimously to pass Bill 48 on third reading which rezones the land commonly referred to under the project title Koa Ridge, a Castle and Cooke venture.

There has been much heated debate surrounding the proposed project, much of it centered around concerns of increased traffic congestion and the irreversible destruction of "prime ag. land".

The project has been forwarded, mainly under the label of "affordable housing" for the expanding population of Oahu.  Many if not most of the days testifiers on Bill 48 represented businesses, unions, or construction companies, all in favor of passage.

The dissenting voices were individuals, claiming concern for the future of the area and the island.  Some questioned whether the proposed "affordable housing" was actually "affordable" citing the qualifications for that designation as "140% of median income...That's market value!".  Council Member Menor made a point of asking what affordable housing is.

One of the individual testifiers called out, "This isn't for us...this is for Castle and Cooke" and "I don't want the crappy jobs," referring to her comments that any jobs which would come from the project would be temporary or would be low wage employment.

The final vote counts are as follows:

As a side note, the Council also passed through Resolution 13-260:


authorizing the use of overt video monitoring in the City and County of Honolulu to prevent and deter general criminal activity and achieve the legitimate law enforcement objective and legitimate public purpose of ensuring a safe and secure 2013 Honolulu Marathon event.

and deferred Bill 62 which would require use of helmets for


minors when operating a skateboard, roller skates, including inline skates, a toy vehicle or a similar device upon the public sidewalks, alleys, malls, parks, grounds, parking lots, and other public places where such operation is permitted

citing concerns about required arrest of minors.
Posted by If Hawaii News at 7:51 PM No comments:

These lyrics, sung by Anytime Amy and Willie K (reunited for this "historic day"), opened the ceremony for the signing of SB1 HD1 into law by Governor Neil Abercrombie today 11/13/13.

Throughout the half-hour ceremony Attorney General David M. Louie, Senator Clayton Hee (Senate District 23), and Representative Chris Lee (House District 51) spoke about how this would "change the world".  Governor Neil Abercrombie went as far as to equate the legislation to changing "another universe for all time".

His quote in full follows.


"It never, ever occurred to me, that I would one day have both the opportunity and the responsibility to do something that is as profound as the change that is about to come in a few moments as Patsy Mink was able to accomplish with Title IX that literally changed the Universe for women for all time.  Another Universe is about to change for all time..."

(For those unfamiliar with Title IX, it was a part of the Education Amendments of 1972, nicknamed the Patsy Mink Equal Opportunity in Education Act, which attempted to ensure women could enter the collegiate setting and any other federally funded institutions.)

It seems of interest that there was so much discussion throughout the proceedings of the Special Session of the very focused nature of SB1.  That it would do nothing but legalize same-sex marriage and protect religious freedoms.  One would wonder how this comports with the "profound" and Universal "change" spoken of in the Governor's (and others') speech.

As well as the Universal "change" prophesied by the Governor, it is also worth noting that he said moments later, after reading the 1st Amendment to the Constitution of the United States,


"I submit to you, that SB1, is the epitome of the 1st Amendment in action."

If Hawaii News will be posting select (but long play) audio to the Youtube page as soon as possible.

In the meantime, what follows are a few other quotes spoken by Governor Abercrombie in his speech, which may be of interest:

"This is, in fact, the result of a legislative process which had as its fundamental premise fidelity to support for upholding and defending the constitution of the United States and of the state of Hawaii..."

"Your representative owes you, not his industry only, but his judgment; and he betrays, instead of serving you, if he sacrifices it to your opinion...Parliament is not a congress of ambassadors from different and hostile interests; which interests each must maintain, as an agent and advocate, against other agents and advocates; but parliament is a deliberative assembly of one nation, with one interest, that of the whole; where, not local purposes, not local prejudices, ought to guide, but the general good, resulting from the general reason of the whole. You choose a member indeed; but when you have chosen him, he is not member of Bristol, but he is a member of Parliament."

Lastly, of note to readers, might be the next sentence in that quote, which the Governor omitted in his speech:

"If the local constituent should have an interest, or should form an hasty opinion, evidently opposite to the real good of the rest of the community, the member for that place ought to be as far, as any other, from any endeavour to give it effect."

the full passage may be found here

Posted by If Hawaii News at 1:08 PM No comments:

After a nearly 11 hour session the Hawaii State House of Representatives has passed the contentious same-sex marriage legalization bill SB1.  The final vote counts can be found below.

The Opposition Chants and Rallies Against SB1 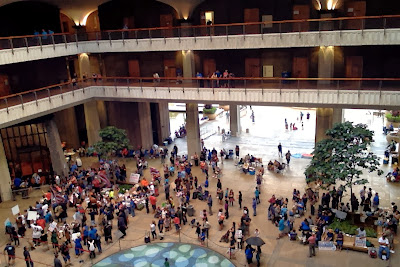 Posted by If Hawaii News at 5:43 PM No comments:

Segregation at the Hawaii State Capitol? 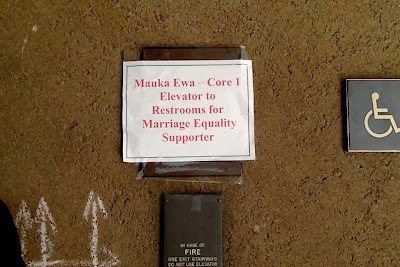 Posted by If Hawaii News at 2:07 PM No comments:

If Hawaii News
IHN is dedicated to providing current and relevant content about what is happening in the great state of Hawaii. IHN believes that the truth, in full, is one of the fundamental tools to good decision making.